The various TatukGIS Developer Kernel product editions, despite language differences, share the same API across all supported development platforms. The same API can be used on VCL, FMX, WinForms, WPF, ActiveX, Java Swing, and even with TatukGIS Editor scripting. The use of the term “Same API” does not mean class naming and everything else is 100% the same - this is not possible due to platform technology differences. Still, the code across platforms is highly similar. The sample below, written on six very different platforms, demonstrates the high level of code similarity:

Therefore, in the remainder of this document, the API relationship is described without reference to a particular platform and language.

This chapter casts some light on basic API concepts such as shape, layer, and viewer and the relationship between these concepts.

The Viewer is probably the most basic and commonly used part of the API when creating a new application. The Viewer can be thought of as a container that holds the whole map and is responsible for rendering the map on the user device.

Every map is constructed from a number of layers, with each layer typically containing a different kind of map feature, e.g., borders, lakes, cities, roads, etc.

How the viewer works

After placing the TGIS_ViewerWnd component on a form, for simplicity we usually (as is done in all the source code samples) rename this component to GIS. Let's take a look at what happens if we use the code:

Basically, the Viewer will:

So what happens if we call:

Layers in the Viewer draw in the order starting from Item[0] to Item[n]. This means the first added layer is drawn at the bottom, then the next layer is drawn above it, and so on.

Non-visual operations (though the Viewer will refresh its content if necessary), include:

A layer is an object that holds map data, which can be:

A layer has knowledge about the coordinate system and where the layer should be placed on the globe:

The Viewer contains layers, though a layer can exist without the Viewer. Without assigning a layer to the Viewer (but upon calling Open method on a layer), most methods and properties are still available. Never-the-less, some operations strictly depend on a Viewer relationship:

The vector layer is a kind of container for geometric shapes. A vector layer can contain one or many shapes. Vector layers fall into two main categories:

Generally, a vector layer can hold any type of shape feature (e.g., points, lines, polygons). Some vector formats, however, such as the SHP format, permit only one shape type per file. The property SupportedShapes is used to query for which shape type(s) are supported by a given layer. A similar layer restriction applies to supported dimensions: X and Y (2D), XYZ (3D), andXYZM (3D + Measure). The property SupportedDimensions queries for which dimensions are supported by a given layer.

One specific consideration to be remembered is, due to the possibility of an on-demand scenario, a shape retrieved by GetShape or fetched by a Loop is valid only temporarily. Therefore, a pointer to this shape can be invalid upon the next iteration. To make a pointer validity persistent, call:

No direct property gives access to a list of all shapes. Shapes can be read on-demand for layers containing millions of entities. Property items give access only to in-memory items. To query for items within a layer, the recommended way is to use iterators like:

Furthermore, Loop iterator allows querying for shapes that have a topological relationship to another shape using the DE-9IM model (to find spatial relationships between shapes such as touch, within, intersect, etc.). Together with TGIS_Topology.MakeBuffer, this gives the means to perform advanced spatial querying and analysis.

TatukGIS has no concept of a “native” layer format or even a preferred format. All layers have the same interface, open/save transparently, and are treated equally. All data formats are read directly without any kind of transcoding. Therefore, SHP, MIF, TAB, Oracle Spatial, and all other supported formats can be considered “native”, making data format selection solely a matter of customer choice. Remember, however, not everything is supported on all supported formats. For example, SHP format specifications permit saving only one shape type per file, whereas GML has no such restriction. On the other hand, SHP is faster with huge layers than text-based GML. For some layers (i.e., formats) TatukGIS has implemented only reading support, so there is no ability to write data to such layers (typically due to insufficient customer demand and/or the greater difficulty of offering write support for formats that are not openly documented).

Links lead to the Delphi version of the documentation.

A pixel layer can hold a bitmap (photo) or a grid (such as a digital elevation model). As with vector layers, image layers can be:

As with vector layers, TatukGIS has no “native” or preferred pixel layer format, so format selection is solely a matter of customer choice. All supported pixel layers have the same interface, open/save transparently without any format conversion, and are treated equally.

A vector layer shape object is responsible for storing the geometric information for a single feature.

A vector layer contains shapes. A shape, however, can exist without being assigned to a layer. Never-the-less, some operations are strictly dependent on a layer relationship:

This chapter offers a few very basic operations to demonstrate using the API.

Find a shape by clicking on the map

That's all! Now upon clicking the “Select” button, the map changes to select mode and any click on the map selects/deselects a shape.

That's all! Now, upon clicking on the “Add Shape“ button, a new vector layer is created and a new shape (covering part of Europe) is added.

Find all shapes within polygon

That's all! Now, upon clicking on the “Select shapes” button, we will:

In just a few steps we have illustrated basic concepts for working with the Viewer, layers, and shapes.

To compile samples and open within the IDE requires the TatukGIS Developer Kernel, trial or retail version. The download of either version includes an extensive set of source code samples, including the very basic samples discussed here. 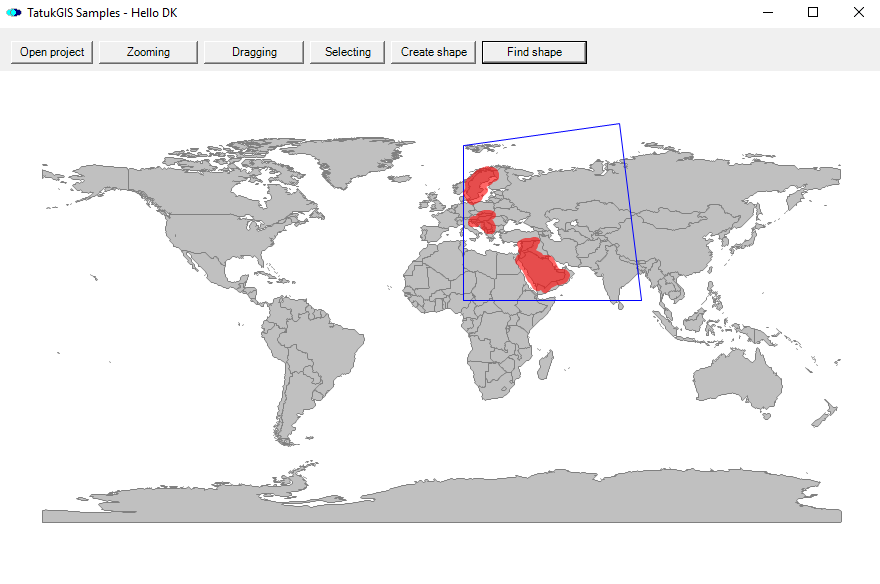 Source and compiled versions of this sample for supported platforms can be found here:

Along with the Viewer component featured in this API overview, the TatukGIS Developer Kernel includes a number of other components.

Viewers are responsible for map rendering and presentation.

Legend control, responsible for rendering on an application canvas a tree of layers, ordering/reordering layers, and visual style editing, is implemented in TGIS_ControlLegend.

Scale component, responsible for rendering scale bar on an application canvas, is implemented in TGIS_ControlScale.

North Arrow control, responsible for rendering a compass rose on an application canvas, is implemented in TGIS_ControlNorthArrow.

Attributes control, responsible for rendering and editing shape attributes (fields) on an application canvas, is implemented in TGIS_ControlAttributes.

GPS control, capable of direct reading NMEA data from a Com Port or LocationServices and rendering the locations on an application canvas, is implemented in TGIS_GpsNmea.

Along with the basic Viewer/Layer/Shape operations, a number of high-level classes perform some common tasks. This subchapter mentions most of these common tasks.

Exporting Viewer content as an image is implemented in TGIS_PixelExportManager

Printing is implemented on each platform separately to match platform specific requirements and is available as TGIS_PrintManager.

Creating vector contours from a grid image layer is implemented in TGIS_ContourGenerator.

Routing and generally finding a path within a network are implemented in TGIS_ShortestPath, TGIS_Network and TGIS_IsochroneMap.

Geocoding and reverse-geocoding layers (without calling some web service to do this) is implemented in TGIS_AddressMatching.

Image or vector layer rectification, using polynomial transformation of the 1st, 2nd, an 3rd order and Ground Control Points (GCP), is implemented in TGIS_TransformPolynomial and is available in TGIS_Layer.Transform property.

Common utility functions like creating a point, finding an extent or intersection, etc., are implemented in TGIS_Utils.