The Hydrology toolset is intended to support water resources applications. It provides the most commonly used functions in hydrological analysis.

The TatukGIS Developer Kernel (DK) includes various hydrologic tools required in the workflow mentioned above. All of these tools are shared as methods of the TGIS_Hydrology class.

A hydrological workflow may contain steps as follows:

When performing hydrological analyses, the sequence in which maps are prepared is important. Always start with a DEM with filled sinks (Fill), and then run tools in the order required for the workflow:

So to achieve, e.g. StreamOrder, the following sequence is required:

Tools API is consistent and easy to use, which can be checked out below in the Pipeline script or Hydrology sample application.

All the implemented methods are based on the D8 flow model. In this model, a single flow direction in the direction of the steepest slope towards one of the eight (cardinal and diagonal) grid cells neighboring is used to represent the flow field.

Local depressions (pits, sinks) in the DEM can cause inaccuracy when determining channel networks. These problematic grid cells can be detected by the TGIS_Hydrology.Sink method which generates a map identifying all sinks, flat areas and cells flow towards each other. Sample problematic cells are shown in gray below. 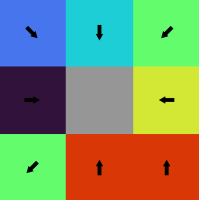 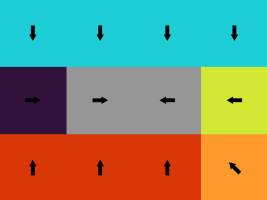 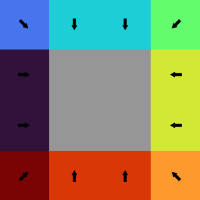 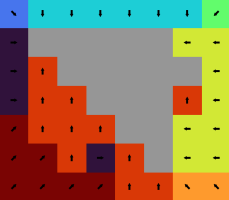 Every hydrological analysis starts with creating a depressionless DEM.

Using information about local artefacts of a dem from map with sinks, user can fix it manually, or use the TGIS_Hydrology.Fill method to generate DEM without pits and flat areas.

Having a hydrologically conditioned DEM, it is possible to use other hydrological tools implemented in the DK with a high degree of certainty about the quality of the results.

The Fill tool with enabled _applySlope option generates a hydrologically conditioned DEM and ensures proper delineation of basins and streams. This is the default.

This tool with the disabled _applySlope option may generate a DEM with flat areas that may still cause unexpected results. Such models need further preparation. The ResolveFlat tool may be use for this purpose.

The next problem to solve, beyond the sinks, is the correction of DEM for flat areas. This is a necessary process for hydrological analyses and modeling, such as the determination of flow directions and accumulations, and the delineation of drainage networks and basins.

If area of interest consists large flat areas, especially in lowlands, TGIS_Hydrology.ResolveFlat method can be used to assign drainage directions over flats. It can be done in two ways: 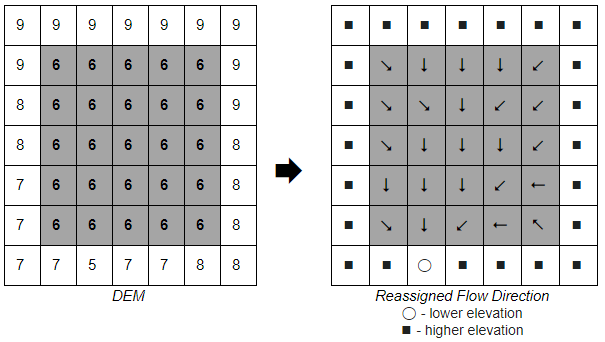 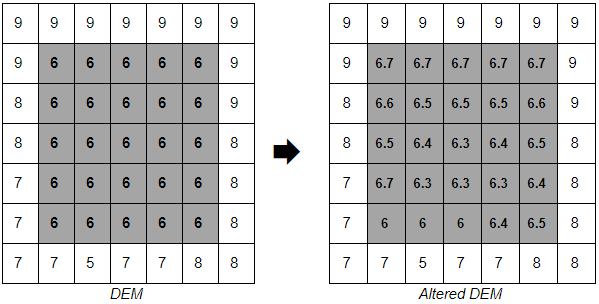 Flow direction is the first necessary hydrologic characteristic of a terrain. It can be generated using TGIS_Hydrology.FlowDirection method. The flow direction for a cell is the direction water will flow out of the cell. It is encoded to correspond to the orientation of one of the eight cells that surround the cell, as follows. 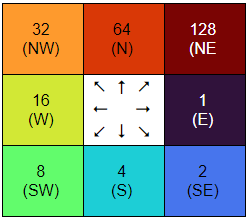 Using a DEM as an input layer, this method generates a flow direction grid as follows.

What can be illustrated using arrows.

See an example map of the flow direction. 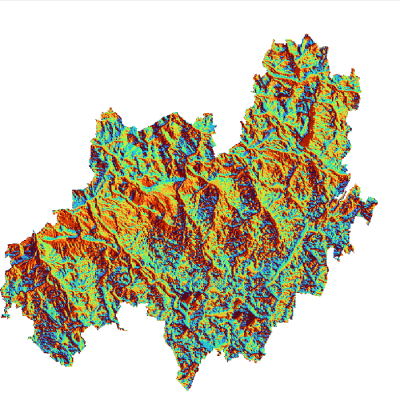 There are four possible conditions to consider in determining flow direction:

In the flow accumulation data set, each cell is assigned a value equal to the number of cells that flow to it.

The local highest topographic cells (ridges) have a value of zero and the flow accumulation values increase downwards. Cells that lie on drainage networks have substantially higher values than cells on hill slopes.

In order to improve the visualization of the resulting flow accumulation map, a GeometricalInterval method of classification can be applied. 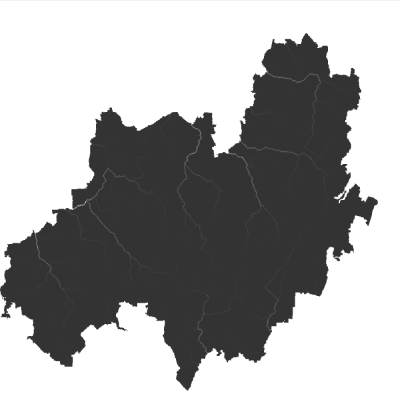 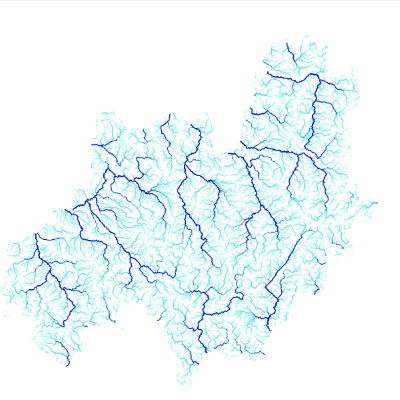 The drainage basin is a land area where precipitation runs off into streams, rivers, lakes, and reservoirs. It is a land feature that can be identified by tracing a line along the highest elevations between two areas on a map, often a ridge.

TGIS_Hydrology.Basin method delineates areas of land that drain all the streams and rainfall to common outlets localized at the edge of analyzed terrain. These areas are marked with successive identifiers as grid values. 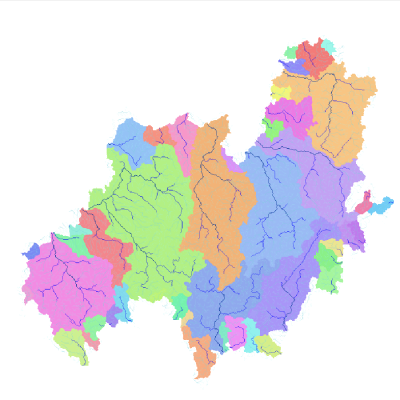 The size of the delineated basins can be limited using the _threshold parameter. This parameter specifies the minimum number of cells needed to create a basin. The default value is 0.

A watershed is an upslope area that contributes flow to a common outlet. The outlet, or pour point, is the point on the surface at which water flows out of an area. It is the lowest point along the boundary of a watershed.

TGIS_Hydrology.Watershed method requires both flow direction data and outlets as a grid, or vector (points) data. Each watershed is marked as grid value, based on its outlet identifier taken from cell values if the input is a grid, or the specified field if the input is a point vector layer.

To obtain better results, pour points should be located to cells of high accumulated flow. 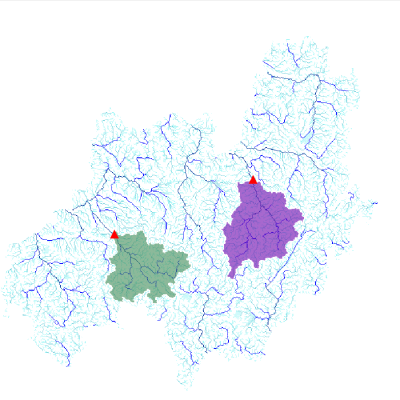 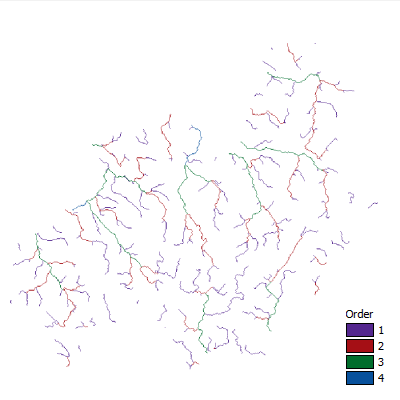 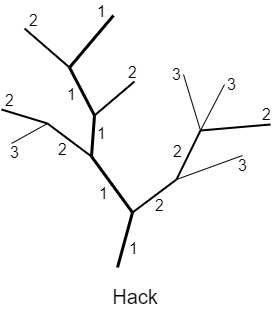 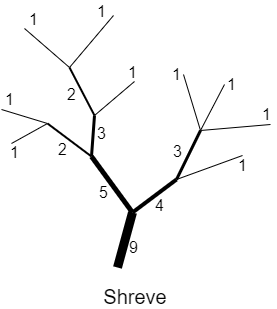 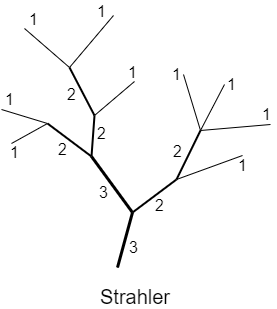 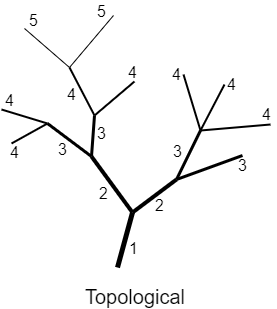 Similar to the Basin tool, a delineated ordered stream can be limited by the _threshold parameter. This parameter is applied to the flow accumulation dataset and only cells with values greater, or equal than the threshold, are processed. The recommended value is 1% of the maximum value from the flow accumulation grid. This value is automatically assigned by default (_threshold=-1).

For some applications, the vector representation of the hydrologic data is more suitable. Raster to vector conversion can be achieved using TatukGIS DK tools: 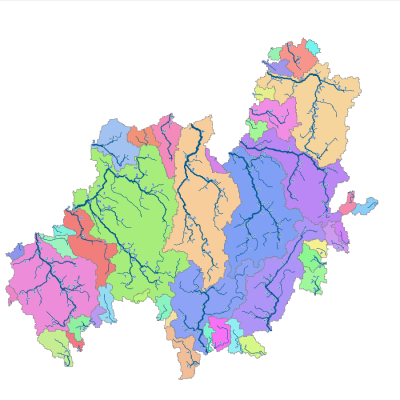